Every Child Counts campaign beyond Pune

The Every Child Counts (ECC) campaign was launched by Door Step School NGO (DSS) in the year 2011. The objective was to ensure every child between 6 and 14 years age living in the city of Pune 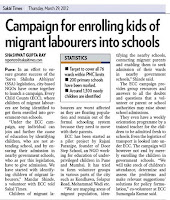 gets its right of free elementary education. With help of citizen volunteers, corporates, educational institutes, and government agencies, ECC could reach out to more than 2,000 children in above age group, who had never been enrolled in or had dropped out of formal education system. A campaign framework was designed by ECC team with help of Tata Institute of Social Sciences (TISS). This framework includes campaign methodology for NGOs, a volunteer tool kit with guidelines for survey--admission--follow-up activities, challenges faced and solutions derived under this project, etc. In short, a replicable model of the citizens' campaign was prepared.

Almost every developing city in India faces similar problems of children remaining out of schools, despite the constitutional provisions made under Right To Education (RTE) Act 2009. It has been observed that most of these out-of-school children in urban areas belong to migrant communities. The replicable model of ECC citizens' campaign is being offered to local NGOs and groups in cities other than Pune. In one of such efforts, DSS-ECC team got connected with Mr. Milind Babar of Disha Foundation, Nashik and through him,

with Mr. Sachin Joshi of Espalier Experimental School, Nashik. Mr. Joshi and his team at Espalier School have very enthusiastically taken up the Every Child Counts citizens' campaign in Nashik, and have reached out to more than 500 out-of-school children living in slums and temporary shelters of migrant communities in the city. The children found under ECC survey are being enrolled in nearby NMC (Nashik Municipal Corporation) schools and in few private schools offering free admissions to them. School transport is being arranged for children living at a distance from schools. 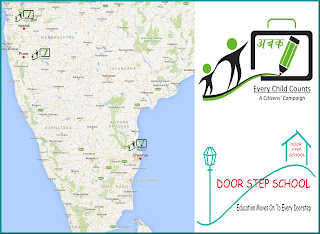 Door Step School is also trying to extend the ECC campaign to other cities, with help of local NGOs or interested volunteer groups. Employees of Cognizant Technology Solutions, Chennai have initiated survey of slums and temporary shelters of migrant workers in the city of Chennai. With inputs from DSS-ECC team, Cognizant volunteers have surveyed 150 slum-dwellers and have found 40 out-of-school children from 6 to 14 age group. With government schools starting their academic year this week, the volunteers are trying to get these children into mainstream of education. The survey will be extended to other areas of Chennai and more children are expected to benefit from the efforts being taken by Cognizant volunteers.
Posted by Mandar Shinde at 12:35 PM

Email ThisBlogThis!Share to TwitterShare to FacebookShare to Pinterest
Labels: ECC in News