'Every Child Counts' Citizens' Campaign was launched in October 2011, to ensure Right To Education implementation in Pune city. The campaign was designed to involve citizens of Pune in taking every child to school. With help of individual and groups of volunteers in Pune, ECC could reach out to more than 2,500 out-of-school children during academic year 2012-13, out of which 1,300+ children were enrolled in nearby PMC schools. Efforts were taken to ensure regular attendance of these children in schools. Two major challenges were faced during this - one, lack of daily transport facility, and two, non-participation of parents in their child's education. With help of local NGO's, partner organisations, and private funding, ECC could arrange daily transport for few of these children. However, this was not possible in all cases, hence ECC team has been trying to convince PMC Education Board to make budgetary provision for school transport at all their schools. Since there is no confirmed action planned by them till now, ECC team and volunteers/partners are planning to arrange local transport from the day of admissions. To handle the issue of parents' non-participation in child's education, Door Step School and Every Child Countrs Campaign have launched a project to work directly with parents in Kondhwa area of Pune.

A meeting of ECC volunteers was held on Saturday, 18th of May 2013, to plan survey and admission activities for June 2013. Volunteers from various companies, institutes, organisations, and individuals attended the meeting and expressed their interest in volunteering for ECC campaign. After discussing current status and further plan of survey, volunteers chose areas according to their availability during next couple of months. Corporates like Fiserv, Cognizant, and Symphony offered to conduct survey and admissions in areas like Kharadi, Hadapsar, Baner, Deccan, Pashan, etc. The volunteers will carry out survey in two phases - one, to locate construction sites with labour camps, and two, to collect detail information of children to be enrolled. Volunteers will also visit local PMC schools and set up a dialogue with the school staff, to smoothen admission process.

From last year's experience, ECC campaign team expects more support from volunteers and corporates in arranging school transport from first day onwards. Although there are no solutions offered by PMC Education Board yet, and not enough funding provision available with campaign team, contributions from willing partners is highly anticipated. Let us hope for more support this year!
Posted by Mandar Shinde at 9:47 PM No comments: 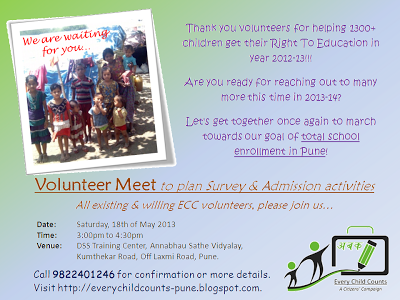 Thank you for being associated with 'Every Child Counts' campaign. With your support and contribution, we could enroll more than 1,300 children in PMC schools last year. The schools will reopen for next academic year by 17th of June 2013. The work for finding out 6-year-old children has already started in some parts of the city. However, local participation of more citizen volunteers is highly needed to cover entire Pune city. To plan the survey and admission activities for next two months, we invite all existing and willing volunteers for a planning meet on next Saturday.

In this meeting, current status of the campaign will be shared with all volunteers, and further plan of action will be decided based on individual or group availability in various parts of Pune city. Please come prepared with your suggestions and preferences during next two months.

Let's get together once again to march towards our goal of total school enrollment in Pune!
Posted by Mandar Shinde at 8:48 PM No comments: