Around 24 children from 4 sites enrolled in ZP School at Bavdhan have started using Vidya Valley School Bus. This is an encouraging example and more schools in other areas like Undri, Pisoli, Bhugaon, PCMC, etc. can support school transport to ZP/PMC/PCMC schools.

After exploring all possibilities of transport for children admitted to Swami Vivekanand School in Shivajinagar, it was decided to admit them to PMC School No.14 where Door Step School already runs Study Classes and transport can be arranged. Volunteer group from Cognizant is discussing this with parents to facilitate this.

Around 10 children from one site in this area have been admitted by parents on their own into a nearby private school. ECC field-staff Swati and Symphony volunteers worked since May to convince these parents.

Volunteers from Geometric-Udaan and Jahnavi have admitted 20 children in Wakad into nearby PCMC school. This was done entirely by Shujauddin and his group, with no direct support from DSS/ECC field-staff. Good example of ECC becoming a citizens' campaign..!

Volunteers from Emerson have nearly completed survey of all the sites in Kothrud and Erandwane areas for presence of children. Two new sites are found and they are planning to assist the parents in admissions this weekend.

Fiserv has stepped forward with transport support with one of their buses for 50 days in Kharadi area. ECC campaign team is working out ways in which this facility can be used by maximum no of children. Most of the larger construction sites in Kharadi have some NGO's working there and many smaller sites have been completed recently.

In Dhayari, many parents have offered to pay for transport. This is a significant step forward as parents have realised the need. One builder has also come forward to support transport of children from his site.
Posted by Mandar Shinde at 1:50 PM No comments:

Admissions are going on in schools across Pune city - Dhayari, Bavdhan, Kharadi, Ambegaon, Magarpatta, Aundh, Baner, Balewadi, etc. More than 150 children enrolled by 24th of June 2013. Admissions in Kondhwa and Mohammedwadi are being done by PPCE (Parents' Participation in Child's Education) team. Close to 200 children enrolled in 15+ schools. Transport is being arranged at all these places, barring one or two sites...

Volunteers from corporate - Fiserv and Emerson are working on revisiting sites and admissions in Kharadi and Kothrud-Erandwane areas respectively. Volunteers from Symphony participated in weekend admission activity in Balewadi area, with good level of involvement. 28 children were enrolled here.

Responding to our request, Balewadi School was kept open on Sunday for admissions.

Many of the PMC schools run in two shifts - morning and afternoon. Girls and boys are enrolled in separate shifts. This complicates transport arrangements for children coming from construction sites. Hence, PMC School Board (Shikshan Mandal) has issued permission letter for admitting boys and girls in one shift, to make transport arrangements easier.
Posted by Mandar Shinde at 3:09 PM No comments:

I visited the Sidharthnagar school this afternoon. Manjiritai, Reshma and Sunita (ECC field-staff) were there to oversee the admissions. I spoke to them and the school principal Mrs. Bhalerao about the transport. The school wants us to take full responsibility. The person bringing the children last session was not doing a proper job. Some children had complained that he did not come to their sites etc. Also he did not come on time to pick up the children from school.

One person who runs a couple of vehicles for schools contacted us. I've given his card to Manjiritai. He seems to be ok and eager to work for us. We will also have to employ a lady to accompany the children. There is a lady who lives near the school whom Manjiritai has met and who is willing to work as an escort.

I've also requested the principal to give us a copy of the letter she will send for the transport funds. It is still Rs.300/- per child. We can use that to push the concerned people for payment. Also we have told the transporter that he will be paid only when the school receives the money. He has agreed today....but what happens if he changes his mind?

The school got its official number today and the principal even praised Door Step School .....staff as well as children....and it's good to see the rapport between the facilitators and the school staff. They have brand new benches and charts and the school looks really good. Even the toilet is clean and has an approach from within the school compound!

Hope the transport works out for the children here.

- 63 children, most of them in the 6-7 years age group, were enrolled in Pokale Vidyalay, Dhayari. Despite some resistance from couple of site supervisors, ECC field-staff completed the admission process as planned. Children have been admitted to both (morning and afternoon) shifts. Although school was insisting on sending the children separately, it was made clear that we can send them only in one shift due to limited transport arrangements. ECC has arranged transport for these children for next 15 days; however, more funds are required for continuing transport facility further. ECC Volunteer Prasad Baliga has been actively working with parents to convince them to send their children to school...

- PMC School in Bavdhan runs in two (morning and afternoon) shifts. Since arranging transport for children in two shifts was not possible, it was decided to enrol all children in Zilla Parishad school in Bavdhan. As the ZP school timing is 10am to 5pm, ECC approached a private school (Vidya Valley) in this area for transport support. Vidya Valley has agreed to provide their school bus for children living on construction sites in Bavdhan area. The transport provider will be taken for site visits once admissions are completed in this school. Private schools with transport facility in other areas of the city can support in similar manner...

A Promising Start to Enrollment!

The ECC Campaign took off on a promising note this year. 24 Children from 6 Construction sites in Shivajinagar were Enrolled in PMC School No.66 at University Circle on Saturday, 15th of June, by Cognizant-Outreach Volunteer Group. One child was enrolled by parent at PMC School No.47B behind College of Agri Banking. This is a good beginning!

The sites had been surveyed by Volunteers from "Cognizant-Outreach" in May, and over the last couple of weeks, parents, site supervisors, and school authorities were contacted for discussions and planning the Admissions.

Though it was a very rainy day, many volunteers joined the effort, some of them even ferried children and parents to the school in their own vehicles. It is indeed heartening to see such enthusiasm and dedication from each and every person who were part of the event Thank you all for the great work!

School authorities were very co-operative and had remained in school beyond the official working hours to complete the process.

Parents are concerned about the next step... how to ensure that children can reach the schools daily! We have to work closely with the school and parents over next couple of weeks to support them in making arrangements for transport.

Migrant children are among the most educationally marginalized in India.

UNICEF Report on Internal Migration and the RTE dated 03-Dec-2012 estimates that there are Approximately 15 Million (1.5 Cr) migrant children in India.

Through the “Every Child Counts- Citizens’ campaign”, it was established that 4500 construction plans for large sites are sanctioned each year by the City Engineer’s office, Pune. Studies carried out estimate that there are migrant families and their children at around 2000 sites. Results of survey done in 2012 show that there are around 4-6 children of school enrolment age (6-7 yrs old) on an average per site .i.e. at least 12000 children across Pune. If we add the number of children of this age group living in other urban migrant communities such as roadside dwellings, unauthorized slums, this number would reach around 15,000.

While working with children from migrant communities and slums in the city, it was observed that daily school transport is a major factor affecting attendance of children and eventually leading to drop-out. 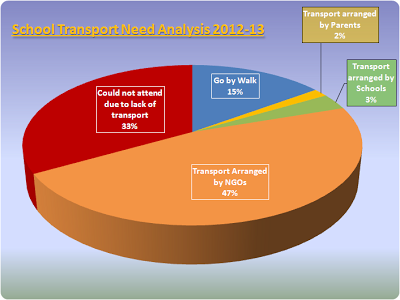 The Right to Education Act 2009 mentions provision of free transport or escort for children where schools are beyond a distance of 1.5 kms from residences. Efforts have been made over last few months to urge the Education Department in Pune to make provisions for School transport under the Right to Education Act 2009. However, these efforts have not resulted in any concrete actions from the Government. In fact, the School Board of Pune Municipal Corporation is now appealing to funding agencies for generation of funds for School transport.

Door Step School, through its various programs in Pune and PCMC areas, reaches approximately 10,000 children, 5000 of whom are enrolled in schools every year and require transport facilities.

Availability of School Transport has a major impact on enrolment and continuation of primary education and therefore requires major funding support from all possible sources. 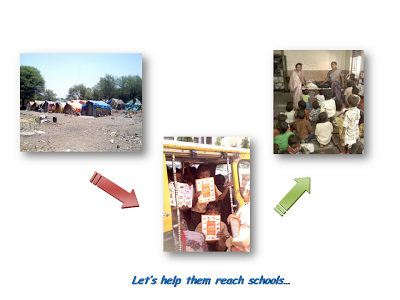 Posted by Mandar Shinde at 10:50 PM No comments: